“I want to tell her that people will be good,” Tewodros Aregawe of the Phosphoros Theater told us as Little Amal closed her eyes to the giant bed made for her in the Paul Hamlyn room, “all the kind-eyed people who walked by her side and listening to her story will be stronger than those who would like her not to be there ”.

It’s a utopian vision that has largely gone hand in hand with the three-and-a-half-meter-tall creation of the marvelous Handspring Puppet Company on its 5,000-mile journey from the Turkish-Syrian border, though even this ultimate exercise in magic theater in motion at the instigation of the pioneer Good Chance Theater has met with hostility in places along the route.

The truth is harsher, of course; never forget that the first act of the new government was to defeat the current bill to reunite refugee children with their families in the UK. But of what use are drama and music if not to transform as much as to inform? The magical environment of the Royal Opera House around midnight on a Saturday night in London – already bustling with Diwali celebrations in Trafalgar Square – and until the first half hour of Sunday morning when Little Amal finally fell asleep represented only what refugee children could dream of. And what a dream! In the Colonnade in Covent Garden Square, dancers Francesca Hayward and Cesar Corrales greeted Little Amal at the end of their performance in the Royal Ballet Romeo and Juliet (photo above by Ellie Kurttz). It was the magic that anyone could share. In the Paul Hamlyn Hall (Floral), the audience was necessarily more limited – I really feel honored to have been a part of it – as a full program of lullaby music, dramatic salutes, dancing and crafts unfolded. . Our tall but gentle and shy child, operated by three of Handspring’s puppeteers (one inside the frame of his chest), shyly greeted the spectators with the infinitely tender and bewitching accents of Rihab Azar’s solos on the Syrian oud (art which I could gladly have listened to for another hour).

The dance was a new choreography by Valentino Zucchetti of the Royal Ballet, a bittersweet Pas de Deux, over a loose prerecorded rearrangement of Rachmaninoff’s Vocalise, looking back and living in the ambiguous moment beautifully performed by Lukas S Bensrod and Joseph Sissens (in photo below). 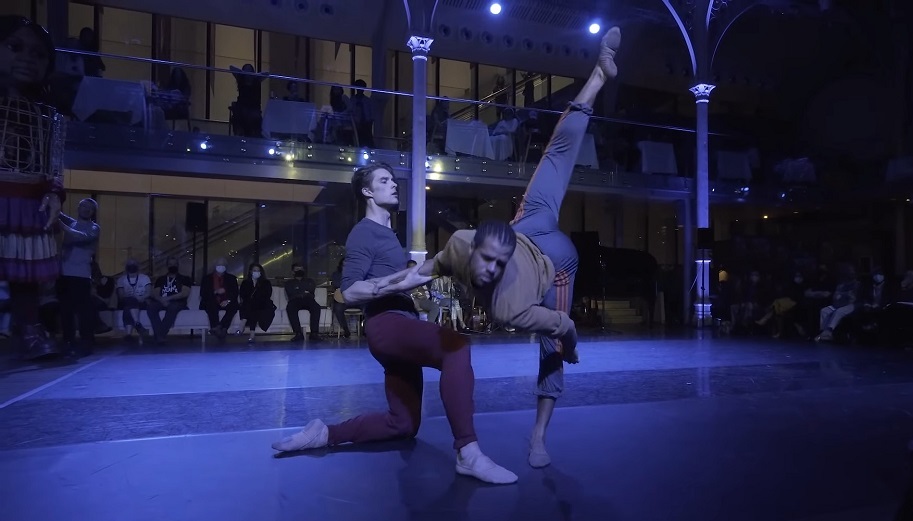 The first of Phosphoros’ monologues, written by Kate Duffy-Syedi and directed by Esther Dix, came from the Afghan Syed Haleem Najibi; He and later Aregawe convincingly led us into an intimate dialogue with Amal, combined with personal meditation. Sixteen singers from the Royal Opera Chorus brought their artistry to Morten Lauridsen’s ‘Sure on this Shining Night’ before joining a diverse and beautifully disposed members of the Citizians of the World Choir to perform The Hope, specially composed by Ayanna Witter- Johnson. 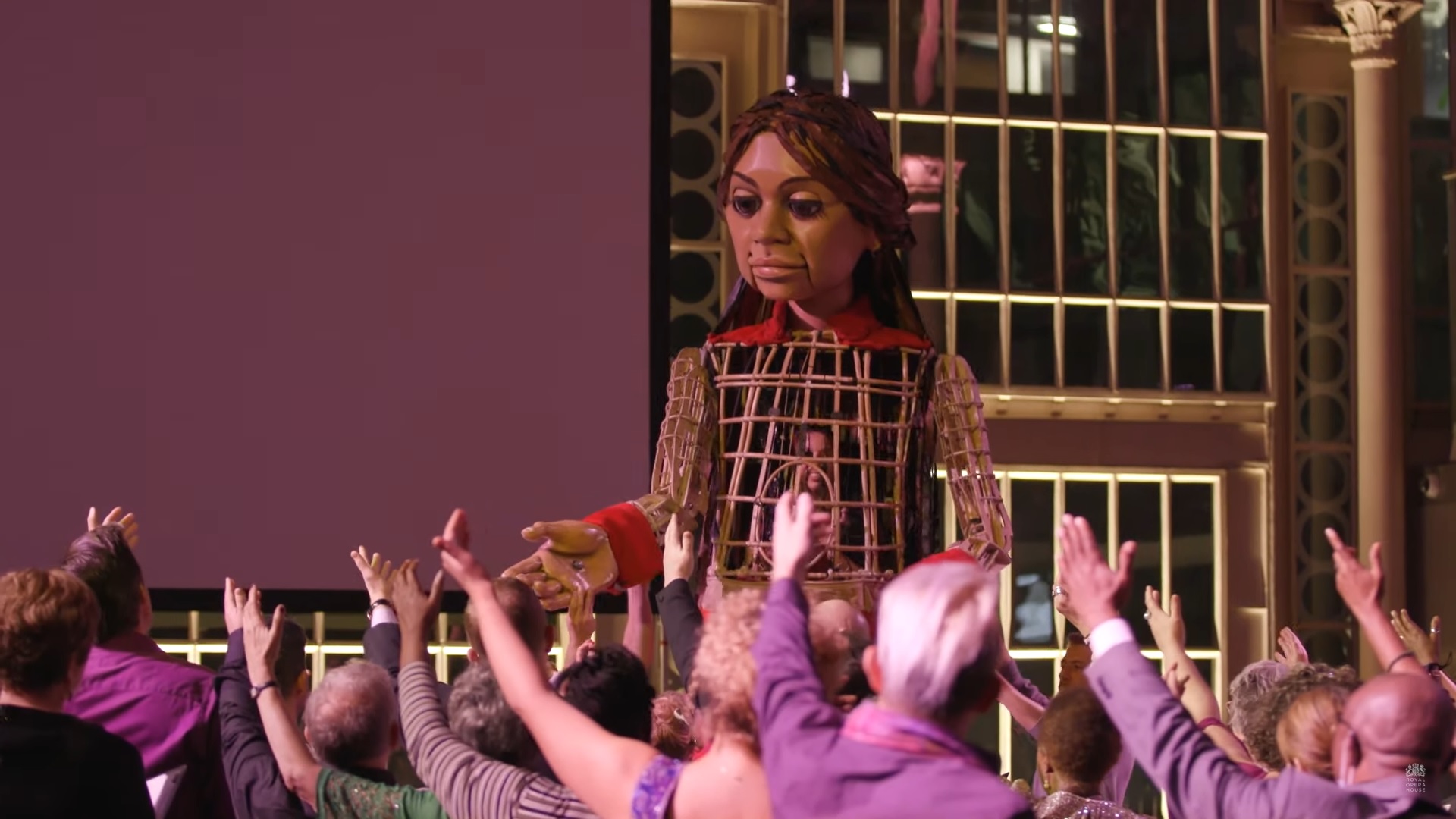 At this point, Amal would have been wide awake again, so we returned to the intimacy with the consummate singing of three lullabies by the newcomers of the Royal Opera’s Jette Parker Young Artists program, soprano April Koyejo (photo above) and pianist Michael Sikich.

After a touching film of children from ROH partner schools singing the Humperdinck’s Evening Prayer Hansel and Gretel – hungry children lost in the woods, still relevant – Koyejo had the moving task of spreading sleep dust on Amal now lying as the Sandman of the opera (in photo below by Ellie Kurttz). 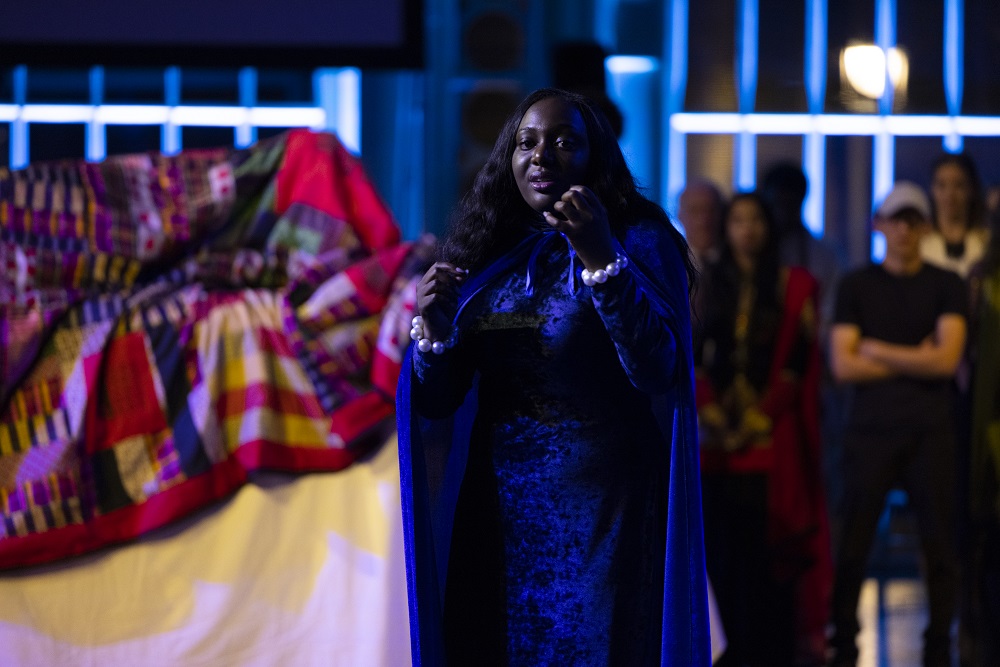 Little Amal was covered in a ROH suit fabric quilt, sewn by the staff in conjunction with Kite Spirit Textile Group, and seemed to be sleeping happily enough through the rambunctious and delighted chatter of the departing crowds. The next day, she celebrated her 10th birthday; tomorrow she arrives at that symbol of rebirth from the ashes of war, Coventry Cathedral, and Manchester is her final destination on November 3rd. Catch it where you can: it’s a once in a lifetime event.